How to Spot Fake Instagram Followers | [Easy Steps – Updated for 2020!] 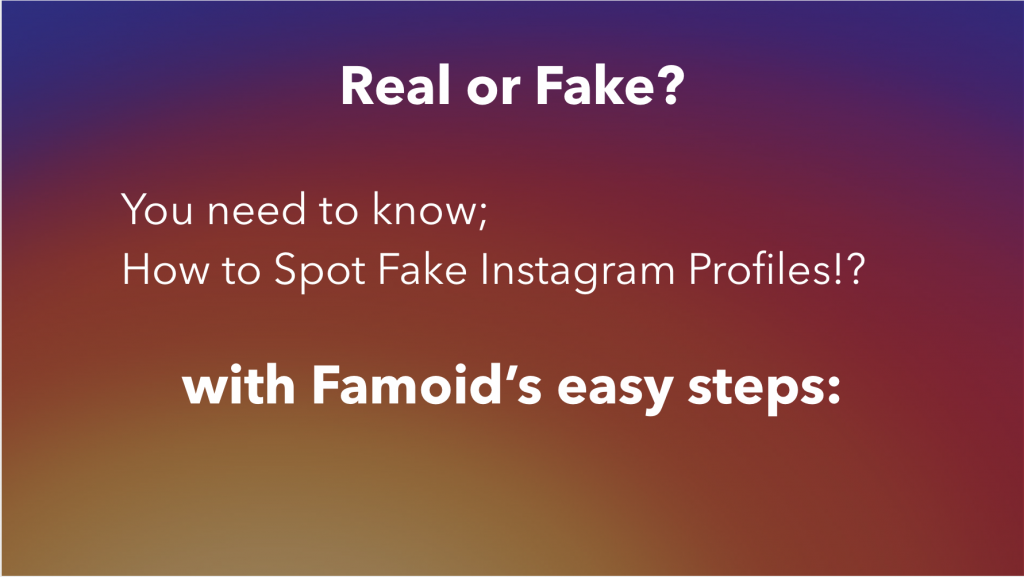 Look at the account’s online engagement

Fake followers exist only to be an added number on people’s following, rather than to actually use Instagram and so they have minimal online engagement than a real follower would. Even though everyone seems to have a recognizable difference in their online engagement as time passes; most people have increased engagement with longer use Instagram usage, fake accounts have a reversed case. With fake accounts, sometimes these bots try to cover up by having some generic engagements at the beginning so that they seem genuine, but after that phase engagement seizes and the account is merely a figure on insta-space.

Instagram is a social media community and nobody operates in a bubble, there are always others with similar interests or other similarities that make them follow a user and engage with them. However, with fake accounts, they have no interests, and so they only follow accounts that pay them for a follow. The level of unbalance in the ratio recognized with fake followers is that you find out they have a substantial amount if following and minimal amount of followers. If an account has a following in thousands and has about a hundred followers, then the account is a fake follower.

People are expected to write something about themselves in their bios and even though everyone has different personalities and some may not be as open as others you can still spot a fake account from their Instagram bios. It is simple; fake accounts do not spend time on their bios, you often see them write something vague or some letter combination that you cannot make sense of on their bios rather than real accounts that tells you a little about the person behind the account. The reason for this is because the accounts are run by bots, and they have nothing to say.

Fake accounts hardly make posts, and even when they do it is irrelevant. Spot a fake follower by going through their post. Real accounts usually have posts that they put up and mostly about relevant things (probably something related to what information is on the bio). Fake accounts on the other hand posts only at the beginning when they open the account after that all they do is follow people and have low engagement.

Fake followers often have no avatars, or they use someone else’s photo as their profile pictures. Accounts that use pictures of popular people as their avatars are likely to be fake followers.

There are web pages that can help you audit your instagram followers, all you have to do is put the Instagram handle on the space provided and run an audit, this tells you the percentage of fake followers you have.

In conclusion, spotting fake Instagram followers will mean you have to be watchful, but it is worth it especially if you are using Instagram for business purposes. You want to know that posts are seen by actual people and interactions are made rather than just having high follower numbers.

Also, if you want to build your Instagram Empire easily and Instantly, you may want to get our Instagram likes + impressions packages below: