How to Screenshot on Snapchat Without Them Knowing (2022)

Snapchat is designed to remove all snaps automatically after you view them. So, if you want to save something, the best way is to take a screenshot.

However, the issue is that each time you take a screenshot, Snapchat will notify the user whose snap you capture. Now, a notification is embarrassing if you don’t want the other person to know that you’re taking a screenshot.

So, if you are looking for ways to take a screen grab secretly on Snapchat, there are a few tricks available.

And, assuming that you’re going to take the screenshot for ethical reasons, in this post, we’ll show you how to screenshot on Snapchat without them knowing.

Read on to discover the methods to capture the Snapchat screen in the most secret ways.

Can You Take a Screenshot on Snapchat Without Someone Knowing?

A few years ago, iPhone users could screen record their Snapchat screen without letting anyone know. But, as of today, this method doesn’t work anymore.

Snapchat has a high level of privacy. To keep your data safe and save it from any breach, Snapchat notifies other users whenever you take a screenshot on the app.

Even some third-party apps aren’t reliable enough to fool Snapchat into taking screenshots without them knowing.

So, no matter what device (Android or iPhone) you’re using, the options to take a screenshot without letting Snapchat know are only a few.

Let’s discuss the options in detail in the next point.

How to Screenshot on Snapchat Without Them knowing

The internet is full of hundreds of hacks to take a screenshot on Snapchat. But, only a few of them actually work.

So, we’ve done all the hard work for you and tested all the hacks to see which workarounds are effective. Based on our tests, here are the methods you can try:

Method 1: Use Another Device And Capture Using The Back Camera

This is the easiest method you can try to take a screenshot on Snapchat without letting a single soul know. And you need zero tech knowledge to try this workaround.

For this method, all you need is a spare smartphone. Use the smartphone’s back camera to take a picture of the snap or story. 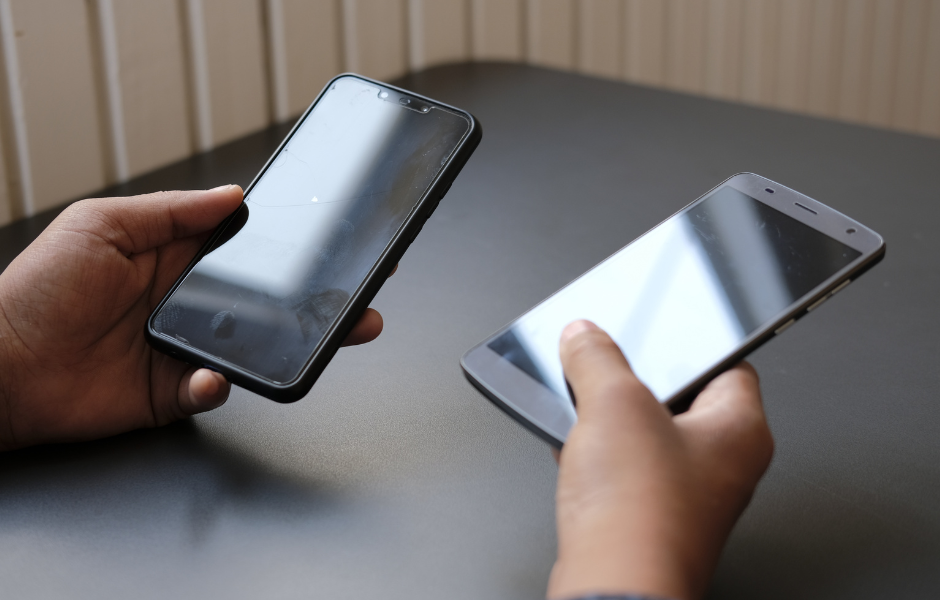 Simply open the Snapchat story or a friend’s chat, then use the back camera of another smartphone device (it can be an iPhone or Android), face it towards the Snapchat interface, and click a picture.

Before capturing the screen using another device, make sure to notice what type of snap you want to screenshot. For instance, recording a video will be a better option than clicking a picture if you’ve received a video.

However, the only problem you can face while capturing the Snapchat screen from another device is the picture’s low resolution. If your hand isn’t steady or you’re not good at clicking pictures, always go for video recording.

Quick Tip: Start recording the video on your spare device before opening a snap. This way, you won’t miss capturing any details.

Also, Snapchat allows you to replay the snaps one time. So, you can use it to take a picture on another phone. However, this action will let the other person know you’ve replayed the snap.

Not everyone has spare smartphones lying around at their home! So as an alternate method, you can use a screen recording app to capture a Snapchat screen without notifying anyone.

Multiple screen recording apps are available on the iOS App Store and Google Play Store. Research the apps and install one of them to record your Snapchat screen.

Although using third-party recording apps can expose you to security risks. And none of the apps are licensed by Snapchat. So it’s best to do background research before installing any app on your device.

You can also use your smartphone’s in-built screen recorder to take a screenshot. But, we can’t assure you that this method will work. iPhone users said using in-built recorders notify Snapchat users, but Android users said it doesn’t send any notification. So, you have to test it yourself to figure out its effectiveness.

Also, to use your phone’s inbuilt screen recorder, you must have an updated version (version 11 or later) of Android and iOS. The screen recorder isn’t available on the older versions.

Method 3: Use Google Assistant (For Android Only)

This hack will work perfectly for you if you’re an Android user. You can ask Google Assistant to take a screenshot for you on Snapchat without letting the other person know.

First, open the snap you wish to capture. Next, simply activate Google Assistant by saying “Ok, Google” and then give a voice command to “Take a screenshot.” Alternatively, you can long press the home button to open Google Assistant.

After giving the command, google will automatically take a screenshot of the Snapchat interface.

The only limitation with this method is that Google Assistant can’t save the screenshot automatically to your phone’s gallery. You have to share it on another app like one drive, Gmail, or Google photos to save it permanently.

Method 4: Turn on The Airplane Mode

Turning on Airplane mode to take a screengrab of Snapchat used to be the most popular hack. But, Snapchat got wiser over time and kind of caught this method. So, the success rate of this hack is a little low compared to other workarounds on this list.

If you’re using the latest version of iOS or Android, Snapchat may notify the other person when you take a screenshot while turning on Airplane Mode. But, if you’re using an older version like Android 9 or earlier, you still might get away with this method.

And to take a screenshot while turning on the Airplane Mode, follow the steps below:

Method 5: Use Quicktime on Mac Device

This one is only for Mac and iPhone users.

The Quicktime app is already pre-installed on your Mac device. If the app isn’t available on your device, make sure to download it from Apple directly or any trusted website on the internet.

With Quicktime, here’s how you can capture screenshots on Snapchat without them knowing:

Following these steps, you can record and save the video to your Mac device. If you want to take only screenshots, press Command + Shift + 4 on your Mac.

Is it Illegal to Screenshot on Snapchat?

However, the legality of this action depends on the intention behind taking the screenshot. If you’re taking a screenshot with the other person’s consent simply because you liked a snap so much that you want to save it, it’s not illegal.

But, if you take a screenshot without consent and share it or use it for unethical reasons, it’s a breach of privacy. And the other person can take legal action against you.

Also, if the other person gets a notification, they can report your account to Snapchat.

So, even if your intentions are pure, always inform the other person before taking a screenshot.

It’s true that sometimes taking screenshots to save a fun conversation, a memorable picture, or a video is necessary.

But, also, using that screenshot for the wrong reasons is a breach of privacy and trust of the other person. And we strongly condemn that!

But if your reasons are pure and genuine, go ahead and try out all the methods we’ve mentioned here to screenshot on Snapchat without them knowing. And don’t forget to let us know which hack worked the best for you.