How to enable Snapchat Dark Mode

After staring at your screen for the whole day on your desk job, you don’t want to do the same lying on your bed at night. Developers understand this and hence have created dark mode or night mode for several apps. Both Google and Apple launched a system-wide dark mode for their respective operating systems back in 2019. Despite that, some apps don’t support dark mode. Unfortunately, Snapchat makes that list. 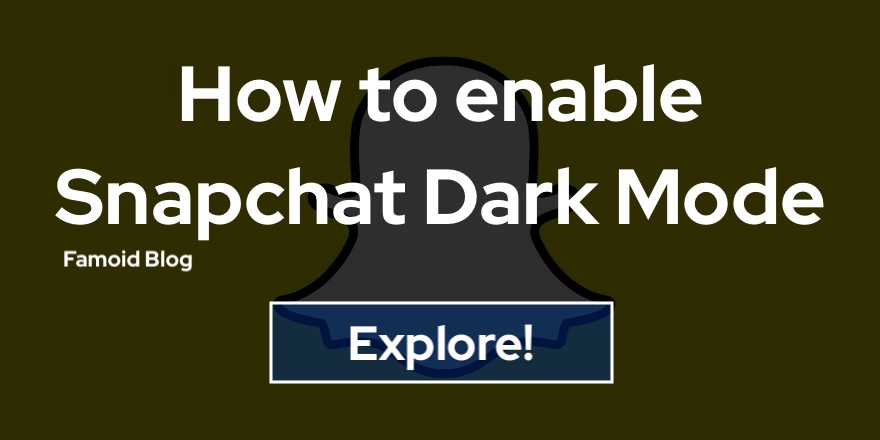 How to enable Snapchat Dark Mode

What is Dark mode?

Dark mode also known as Night mode in some apps and interfaces changes the color scheme to a darker shade or pure black. When lights are out and you’re on your bed scrolling through social media apps like Facebook, Instagram, or Twitter this can be helpful. It takes the strain off your eyes by turning the bright whites to a dark shade, or black. When your eyes aren’t being burnt by the display of your phone, it’s easier to fall asleep. You don’t spend a restless night where you find yourself staring at the clock that hints at the arrival of dawn.

Why can’t I find dark mode on Snapchat?

Snapchat is one of the most popular apps on the App Store and Play Store and is known for its weekly updates. Despite new features being rolled out every week, users haven’t got the sought-after dark mode that has been available on most other apps. It has also become a source of controversy for the app.

However, that’s for good reason. The numerous features that have evolved Snapchat over the years and the bright color schemes may get affected if dark mode isn’t rolled out after thorough testing and numerous rounds of development. Users have also created online petitions to force developers into rolling out the feature. Unfortunately, only Android users get a breather in the form of easy tweaks. iPhone users are still out of luck since there is no native support for a dark mode or night mode on the app and you have to go through a lot of trouble to make it happen.

Why is Snapchat dark mode important

Your phone gets a lot of attention and most of it goes into social media apps. As mentioned above, most social media apps like Facebook, Twitter, Instagram, and the interface on both iOS and Android have received dark mode updates for over a year. The users like the dark mode and when they make the bright switch on Snapchat, it may be uncomfortable to the eyes. Hence night mode a.k.a dark mode has become a sought-after feature for Snapchat on Android and the devs must be working hard to bring it on both iOS and Android.

Moreover, any dark theme increases battery life on phones. Android smartphones have had the OLED screen for a while now and since 2017 Apple introduced their phones to OLED screens as well. With dark mode, a significant number of pixels are completely turned off and hence don’t draw any juice from the battery. This does the obvious to prolong your battery life so that you don’t have to charge your phone as often as you used to.

How to enable Snapchat dark mode in Android

For Android fans, there is good news. No, it doesn’t mean you get native support for Snapchat dark mode. However, the workaround is easy enough for lay users. You need to install the Substratum Theme Engine from the Play Store and Android 8.0 Oreo or above for this tweak.

How to enable Snapchat dark mode in iPhone

Unfortunately for iPhone users, things are a lot more complicated since you need to jailbreak your phone. Even when you change the iOS settings for system-wide dark mode, it doesn’t affect Snapchat. The solution comes in the form of the Nightmare app. The app tweaks the user interface to get around the limitations of the Snapchat app and turns it dark. However, Nightmare isn’t available on the App Store and requires a jailbroken iPhone. Also check; how to enable dark mode on Instagram.

It is not recommended since jailbreaking your iPhone voids the warranty and may also attract a ban from Snapchat. If you still decide to go along with the following steps you should be aware of the risks.

Snapchat doesn’t have a dark mode or night mode. However, users have made themselves heard by the developers and you should be able to see the feature roll out in the future. At the moment you can only rely on these tricks and third-party apps to force a dark mode on Snapchat. To make yourself heard you can also sign one of the numerous petitions on Change.org and other platforms that demand a dark mode for Snapchat. Till then you have to resort to these methods and hope the feature comes soon.