Are you tired of sending the same Cameos? Or, perhaps, you hate the way your nose looks in the last selfie you took.

Whatever the issue is, you can always change your Snapchat Cameos.

In this article, we’re going to show you exactly how to change your cameo on Snapchat. And if you don’t like a Cameo selfie, how can you delete it?

Also, you’ll learn how to enable the two-face feature and invite your bestie to join in your cameo.

What is Snapchat Cameo?

Snapchat Cameos are basically selfies used in a funny GIF, video, or Bitmojis-like avatar. Cameos are a creative feature only available on the Snapchat app to make the conversation more lively and expressive.

When you take a selfie, Snapchat uses it on multiple Cameos so that you can share it with your friends. You can also activate the two-person Cameo feature to make Cameos with your friends (more on this later in the article).

There are hundreds of Cameos available on Snapchat. Also, the platform always adds more new Cameos to make the chat interactive.

But always make sure to enable your camera access on the app to create a Cameo. Without clicking your selfie, you can’t make a Snapchat Cameo.

How to Change Your Cameo Selfie on Snapchat (Android & iPhone)

If you’re tired of sending the same cameo selfie to your friends, then you might want to change the old one and create a new Snapchat Cameo.

And to do that, we’re going to show you not only one but two alternative methods.

If you want a new cameo selfie, Snapchat allows you to change it in Settings. Here’s how you can do that:

Step 1. Open the Snapchat app on your mobile and head to your Snapchat profile. You can navigate the profile page by tapping the Bitmoji icon in the top right corner of Snapchat’s home interface.

Step 2. On the profile page, you will notice the Settings button, which looks like a gear icon. Tap on the gear icon. 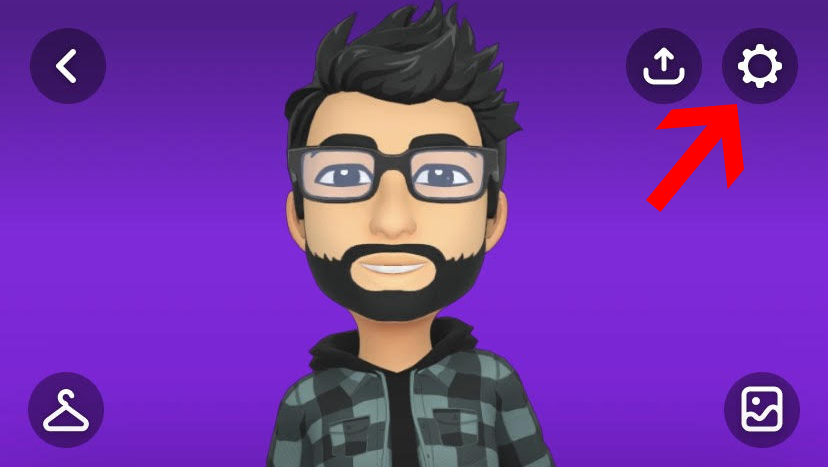 Step 3. Once you’ve opened the Settings page, scroll down and select the Cameos option from the list. 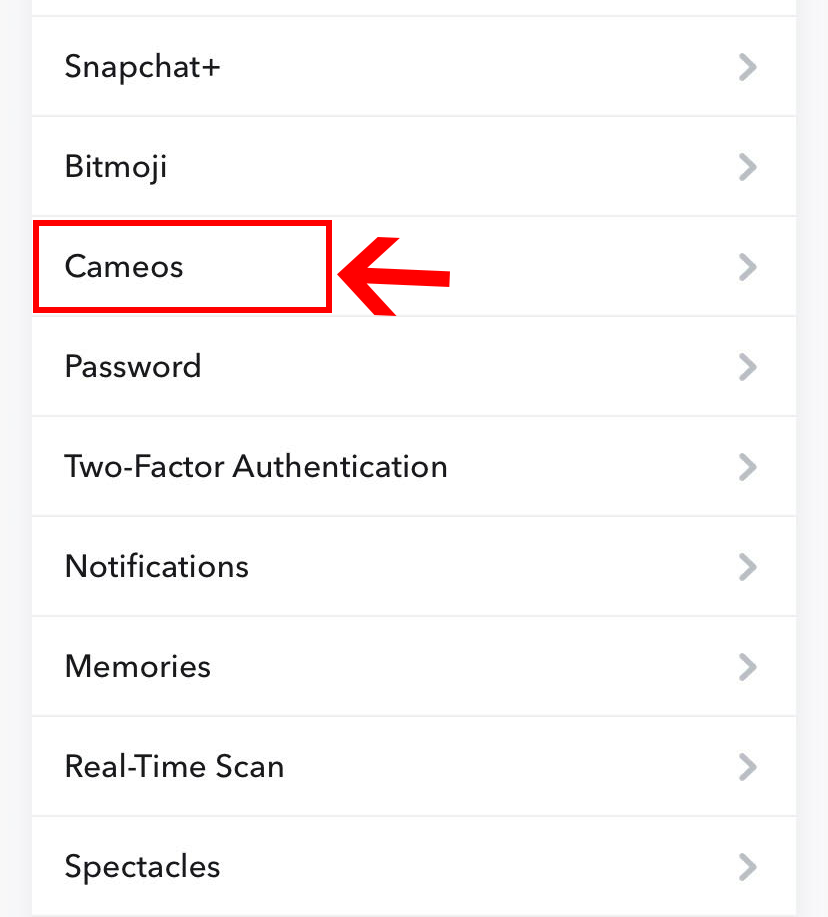 Step 4. Now, under the Actions section, select the Change My Cameos Selfie option to change your previous cameo selfie. 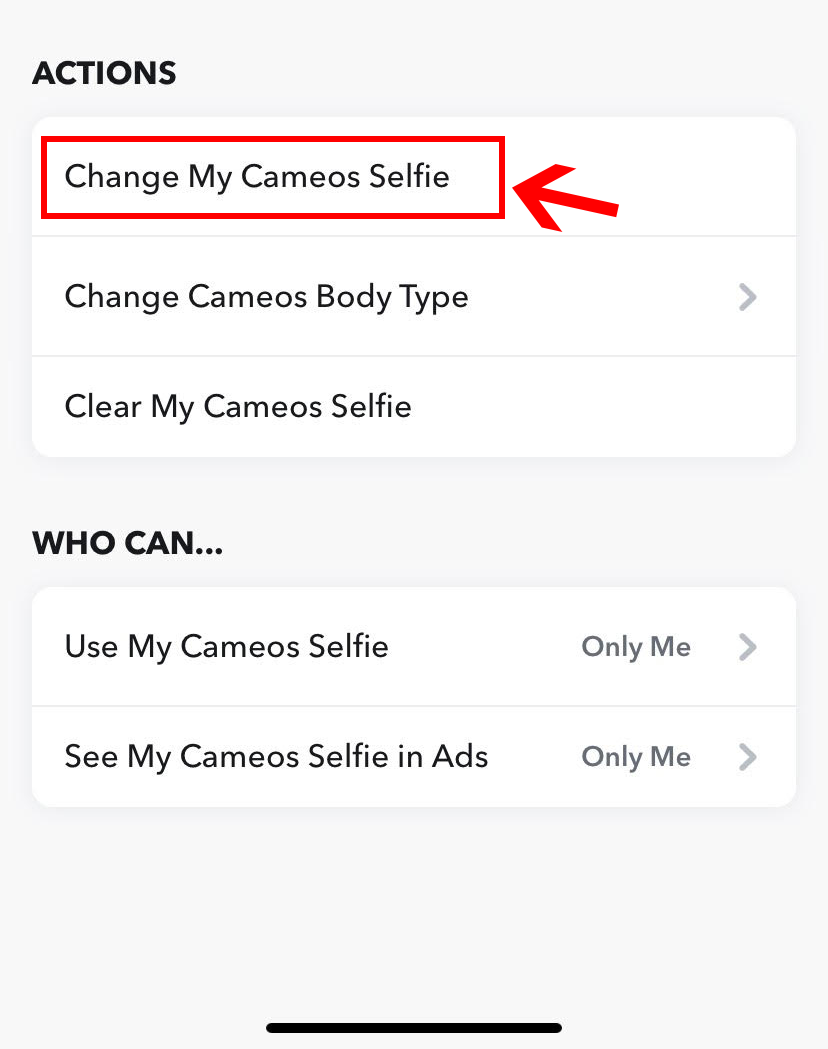 Step 5. Next, tap the Create My Cameo button to click a selfie or select a new one from the Camera Roll. 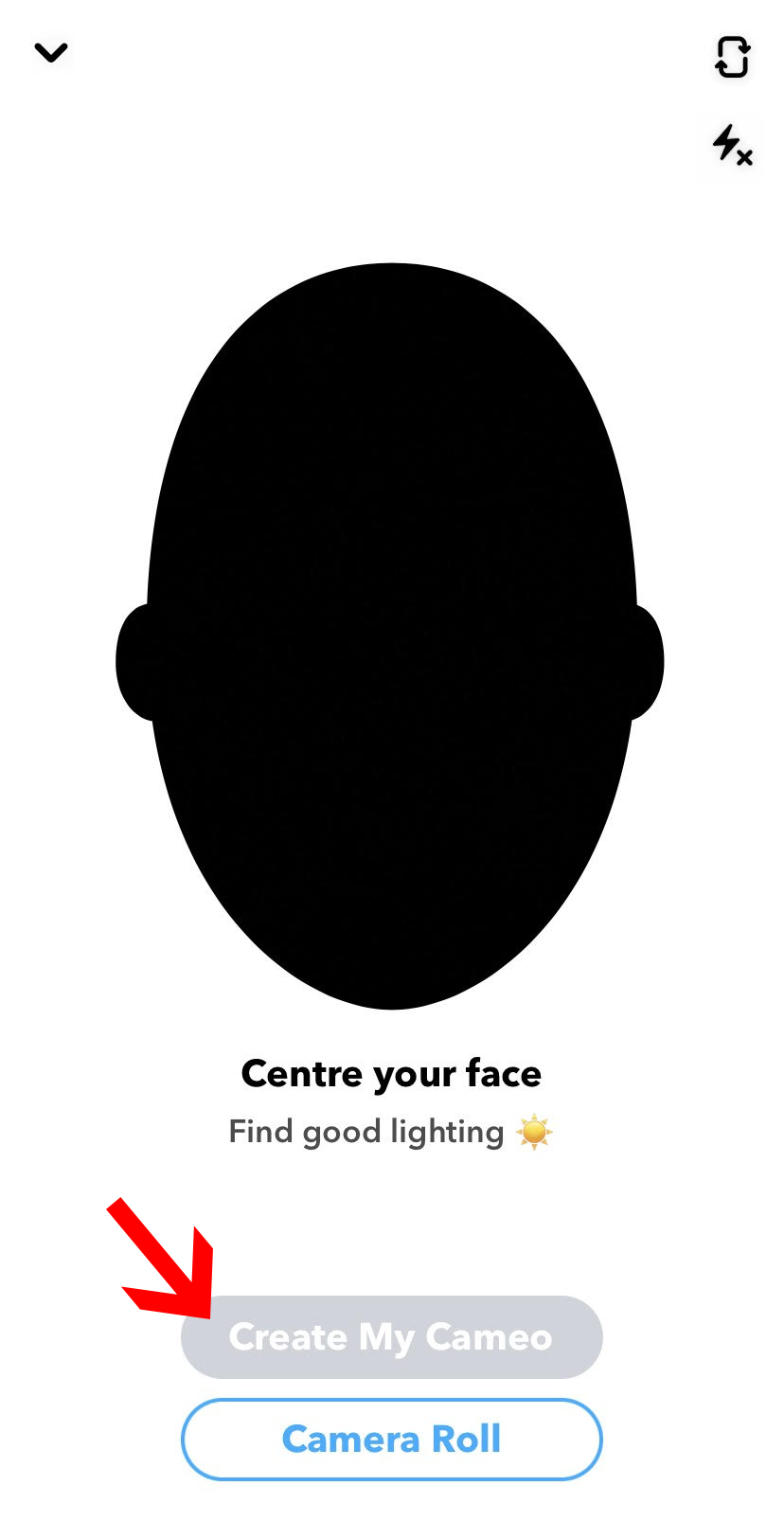 Step 6. On the next page, Snapchat will ask you to choose a body type. Select whether you’re a man or woman and tap the Continue button.

And that’s it! Your previous cameo selfie will get replaced with the new one. Make sure to remember that Snapchat lets you create only one Cameo selfie at a time.

You have to open Snapchat’s chat window to try this alternative method. Here’s how you can do that:

Step 1: Open the Snapchat app, and on the home interface, tap on the chat icon.

Step 2: Open any previous conversation with your friend on the chat tab.

Step 3: Now, tap the smiley icon located right next to the text box.

Step 4: Then, on the following menu, tap on your face sticker button.

Step 5: Now select and long-press any Cameos. This will open a pop-up menu, and from there, select the New Selfie option.

Step 6: Then, take a new selfie and choose a body type. Next, tap Continue.

There you go! Changing Cameos on Snapchat is that simple.

Also, remember that you can use these methods on both Android and iOS devices.

How to Delete Cameo on Snapchat?

If you’re thinking about entirely deleting a Cameo picture and setting up a new one, follow the steps below:

Step 1: Open the Snapchat app on your mobile and head to your profile page.

Step 2: On your profile page, tap the Settings button at the upper right corner of your screen.

Step 3: Now scroll down to the end of your screen and select the Cameo option. 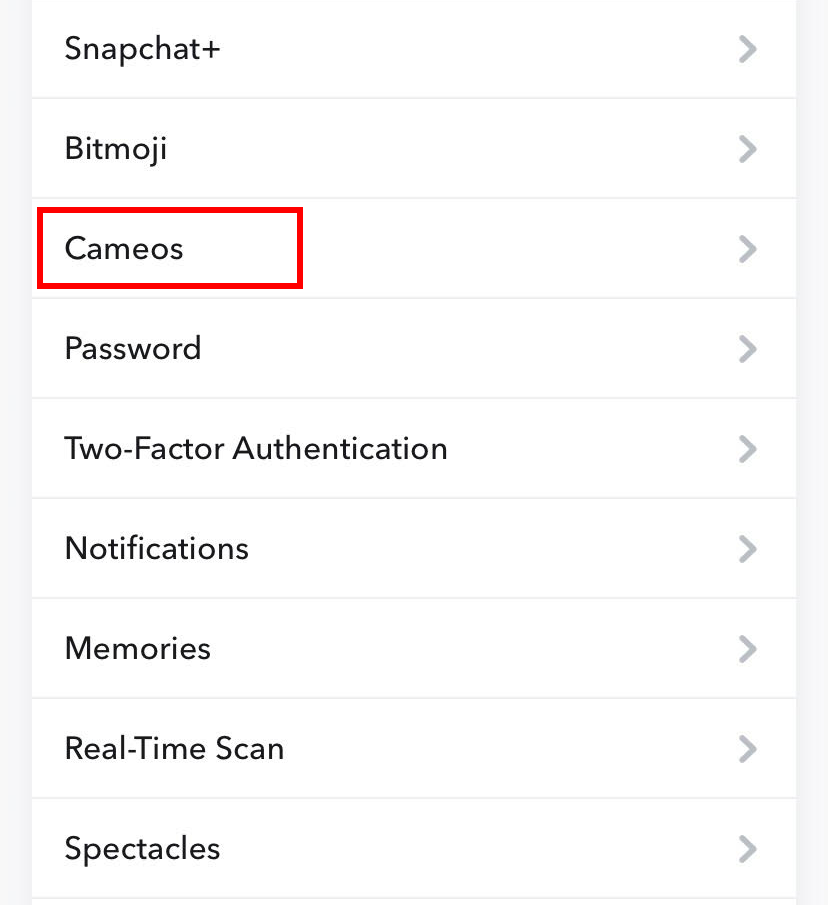 Step 4: Next, tap the Clear My Cameos Selfie option to delete your previous Cameos permanently. 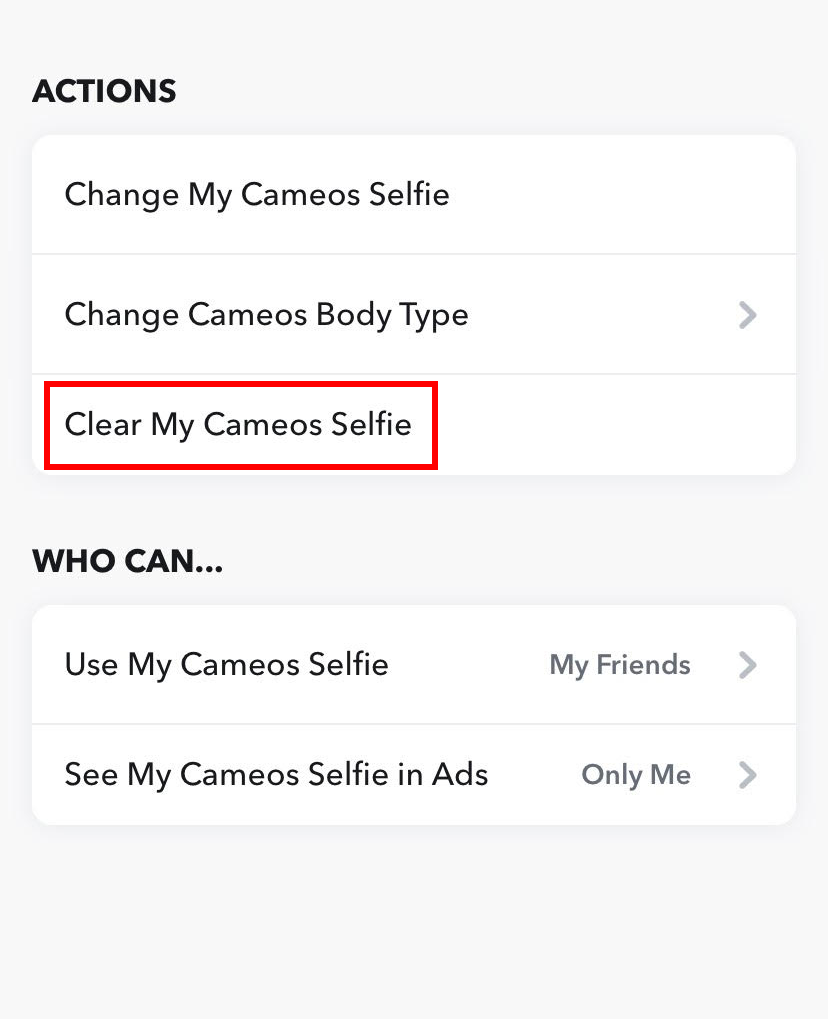 Now you can take a new selfie to create new Cameos on Snapchat.

Who Can See Your Cameo Selfie on Snapchat?

Who can see your Cameo selfie depends on your Snapchat’s privacy settings. If you made the Cameos public, everyone on the app could see them.

If you set the privacy to only me, no one will be able to see it. Likewise, if your Cameos privacy is set to Only Friends, only your friends on the app can see it.

Now the good news is you can change these privacy settings and decide who should see the Cameos on Snapchat. Here’s how you can do that:

Step 1. Open your Snapchat app and go to the profile page.

Step 3. Now tap the Who Can Use My Cameo Selfie option. 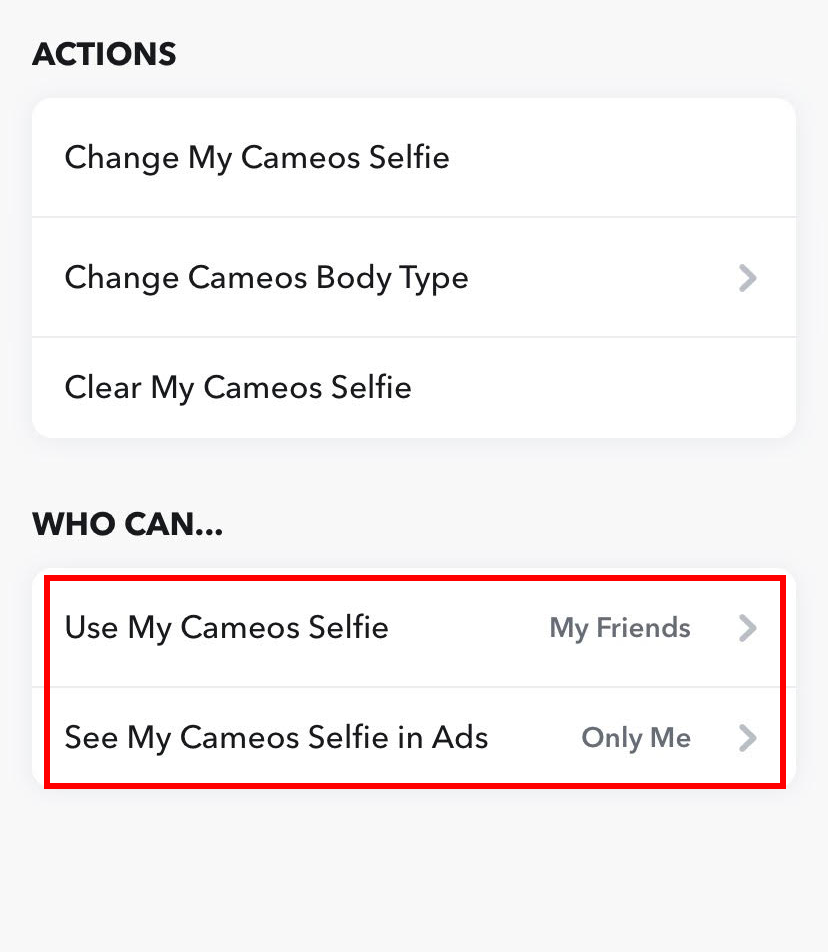 Step 4. Snapchat will give you three options: Only Me, Only Your Friends, and Everyone. 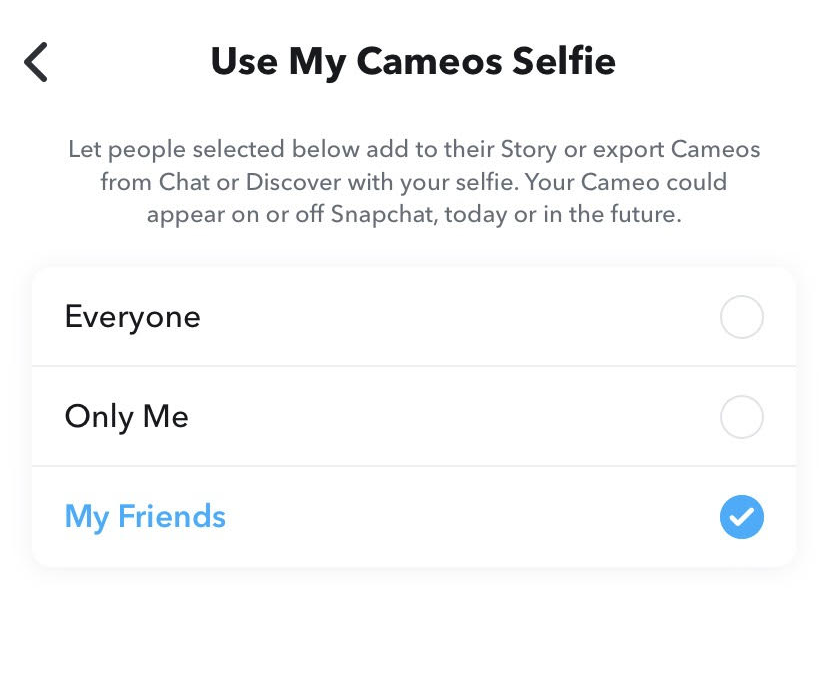 Choose according to your preference, and Cameo’s privacy will be changed for good.

How to Make Two Person Cameos on Snapchat?

If you want to be goofy with your friends on Snapchat and want them to feature with you on Cameos, enable the two person Cameos feature.

When you make a Cameo for the first time, Snapchat will give you the option to enable the two person Cameos feature. Make sure to enable it to have fun with your friends by making double feature Cameos.

But remember, if you set your Cameo privacy to Only Me, the two person cameos feature won’t work.

Once you’ve enabled the feature, open a chat with your friend, tap the Smiley icon, open the Cameos, and search for a fun clip or sticker that allows two people.

So that’s how you can change your cameo on Snapchat.

Everyone gets tired of the monotony and wants new changes.

So, why not change your Snapchat cameo as well? After all, that will help you break the monotony while chatting with your friends. And have some fun!

If you face any problems while changing the Cameos, let us know in the comments.