How to Build a Following on Twitter: The Top Things You Need to Do

Are you looking to get a bigger Twitter following? While it may be far behind Facebook on its number of monthly users, Twitter still has a huge impact as a social media platform. Surveys show that 22% of US adults use Twitter, after all.

Twitter has 369 million monthly active users worldwide as of 2018. Twitter is also a top social media platform that will only grow further. It’s not surprising that more businesses want to boost their Twitter following count.

Below, we’ve got a guide on how to build a following on Twitter. Keep reading for some tips on creating an influential presence on Twitter. 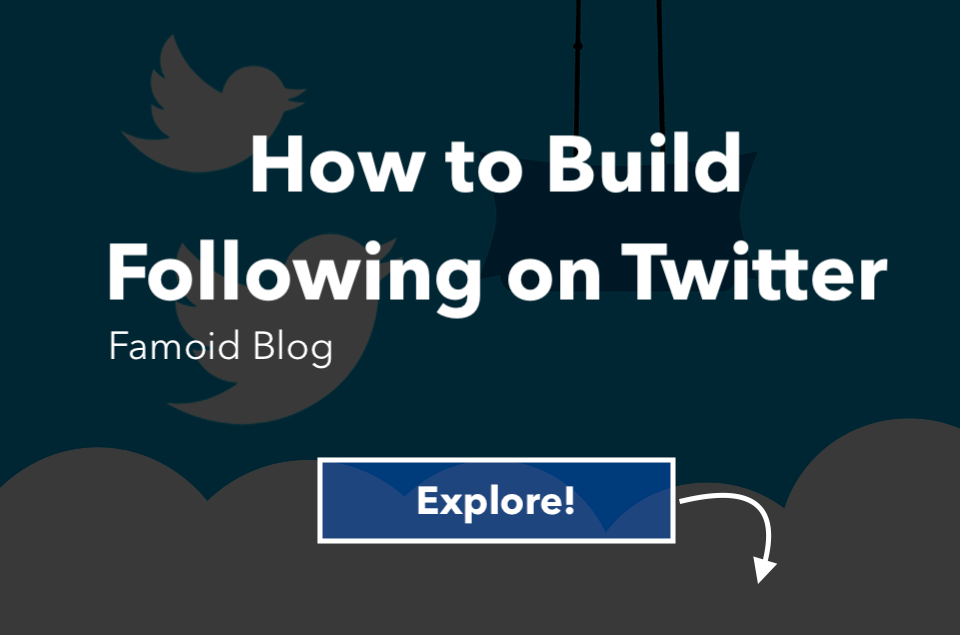 1. Create and Optimize a Killer Profile

Thus, you want to give a good impression of your Twitter profile. If you’re promoting a brand, you want a handle and username with your brand name on it. If you’re using other social media, make sure your names on the other platforms match with your Twitter.

The best thing you can have on your Twitter profile is the verification badge. This shows followers old and new that you’re the real thing. Note that you can lose this badge when you change your name.

Now, let’s talk about the photos you can upload for your Twitter profile. Whether it’s your header image or your profile picture, use high-quality images. This communicates that you’re serious about your brand.

To make your Twitter bio stand out, make it all about what you can offer rather than what your brand is. Use keywords relevant to your brand and remove buzzwords. Finally, pin your most relevant tweet on top of your profile for more retweets and exposure.

2. Become a Reliable Source of Information

Social media sites have great power over what news gets talked about. This is how only 6% of adults on Twitter can account for 73% of tweets about national politics. Whatever you stand for, become an activist of truth and trust.

Fake news is the bane of many internet users today. Information spreads faster than ever but authenticity depletes with this speed. Aid in the movement against fake news and become a reliable source of information.

Check the sources of a tweet before you retweet it. If you plan to post something, verify that it’s updated and factual. A simple Google search to verify a piece of news can make your Twitter a truthful or fake news outlet.

You might notice that some brands tweet as often as 20 times per day. This strategy may work for them. The key is to bring context to each tweet and study competitive analysis.

For Twitter users who want to build following, the “sweet spot” lies between three and seven tweets per day. This allows most engagement with your followers. It’s also tweeting only enough times that it doesn’t become an eyesore.

If you want to be competitive and tweet over 10 times a day, go on. The platform moves fast enough that you can always err on the side of tweeting more often. However, remember to tweet with variety, relevance, and creativity.

Successful social media marketing uses engaging and relevant content. Why else would your followers stick around if the content they get from you is useless to them?

No matter what your business type, you must show the value you bring to your followers. If you must use recent memes to send your message, use memes. If you must create a thread, make one.

Don’t tweet content full of words that mean nothing in the end. Your followers can sense when you’re only tweeting for the sake of tweeting. In contrast, they can also tell when you’re sharing something significant to them.

Engaging content is as vital as relevant content. Think about the following question. Would followers stay when someone else presents the same content in a more interesting fashion?

The best outcome for a tweet is to get as many retweets and likes on it as possible. The more your content gets retweeted, the more exposure it means for your brand too. To do that, you first need to word your tweet in the most engaging way as possible.

Start with something to hook your audience. Since you have a very limited space to send a message, be brief. Play with words or ask intriguing questions.

Let’s say you’re doing a solid B+ on creating engaging content. How should you fix this? One way is to drive engagement to your tweet instead.

Take part in conversations when someone mentions you. Reply as soon as you can to keep a conversation as natural as possible. Be witty about your answers to keep it conversation going.

You can also use the #chats to start a chat on Twitter. If you want to reach an even wider audience, schedule a chat or join a scheduled chat. Make sure you have something valuable to add to the discussion when you join a chat.

What use is it to be on social media if you don’t socialize with your followers?

Don’t be afraid to mention people and retweet others. Don’t make your tweets all about your brand only. Branch out a little and your reach will also expand.

If you want to give a twist, talk to the other business about collaborating. Take inspiration from Wendy’s and Burger King and get into a little Twitter war of your own. If you do this, make sure the tweets are witty and funny enough to spark interest rather than cause issues.

Speaking of issues, there’s always someone out there who has problems with you for now reason. Often, these are only trolls looking for attention. The smart move would be to ignore them.

However, you can use these troll tweets to your advantage, too.

Take one that dishes out some serious ‘burns’ about your brand and ‘burn’ them right back. A bigger, nastier burn from you can generate talk around you. Be wary of more trolls who come looking for the same attention from you when you do this.

As a tip, be wise about which battles you pick and choose on the internet.

If you want to know how to build a following on Twitter, you need to learn this. Visual content is one of the most powerful things you can put online. You can put anything from emojis to GIFs, to photos, to videos.

For many Twitter users, it’s easy to scroll past a text-filled tweet. However, a tweet with accompanying visuals can make them stop and look closer. When you do this, always pick visual content that is of high-quality.

The types of visual content have different pros and cons. For example, well-done memes and infographics can get the most likes and shares. Meanwhile, videos get over 6 times as many retweets as those with photos.

Since you’re going to tweet several times a day, use a variety of visual content. This will keep your followers interested in what you’re going to post next. Relevant and interesting visuals can also get more retweets, which attracts more followers.

8. Hashtag to Your Advantage

Hashtags for Twitter are like keywords for SEO. You optimize your website best when you use keywords. In the same way, your tweets become more visible when you use hashtags.

A follower can search your posts with ease when you use a hashtag unique to them. The best example is your brand or business name. Another example is a sale specific to your brand only, like #SaveMoreWithGilmores.

Hashtags can also give your post some personality or professional tones. For example, your business is under the digital marketing industry. You can use hashtags like #SEO or #contentmarketing on your professional content.

In the same way, you can show some of your brand’s personality with hashtags. Event-based hashtags are also great for piggybacking on certain happenings.

As a tip, don’t overdo it with hashtags to avoid making your posts look like spam.

Do you want to boost engagement on your YouTube channel? Link back to your Twitter to give them smaller updates about your channel. You can do the same when you promote your Twitter on your website and other social media.

Micro-influencers can give your Twitter following a real boost. They’re much like influencers. Their ability to influence and drive people’s interest remains the same.

The only difference is the scale of their influence. Though micro-influencers work on a smaller scale, you want them in your following. Plus, their community can become a source of high-quality, engaged followers.

Your Twitter can gain a lot from their capabilities to influence the behavior of others. The first goal is to know your audience and your brand. This way, you know what kind of influencer you’re looking for.

The next step is to find and have the right people to follow your Twitter. Make sure you talk to the right micro-influencers for your brand. You and the micro-influencer should have similar views or complementing stands.

Did you know that some users create lists to group followers by category? This way, they can make sense of all the tweets in their timelines for each day. They also use Twitter lists to plan responses by priority.

You can do the same. Create one or two Twitter lists for a clearer sense of your timeline and response priority. When you’re done categorizing your followers, leverage other people’s Twitter lists.

Look for Twitter users with lists that they made public. Subscribe to these lists and get access to more vetted Twitter users. It’s a quick and dirty way to improve your signal-to-noise ratio and new connections source.

Twitter makes engaging with customers easier and quicker, especially for customers. It’s why so many brands are creating Twitter accounts. For some, they focus on the follower count, which signals they’re a major influencer in their industry.

That’s it for our guide on how to build a following on Twitter.

We hope you found this post on building your Twitter following helpful and enjoyable to read. Next, read about how to bring out your artistic skills and put them on the ‘gram. Check out our post here about creative Instagram story ideas.